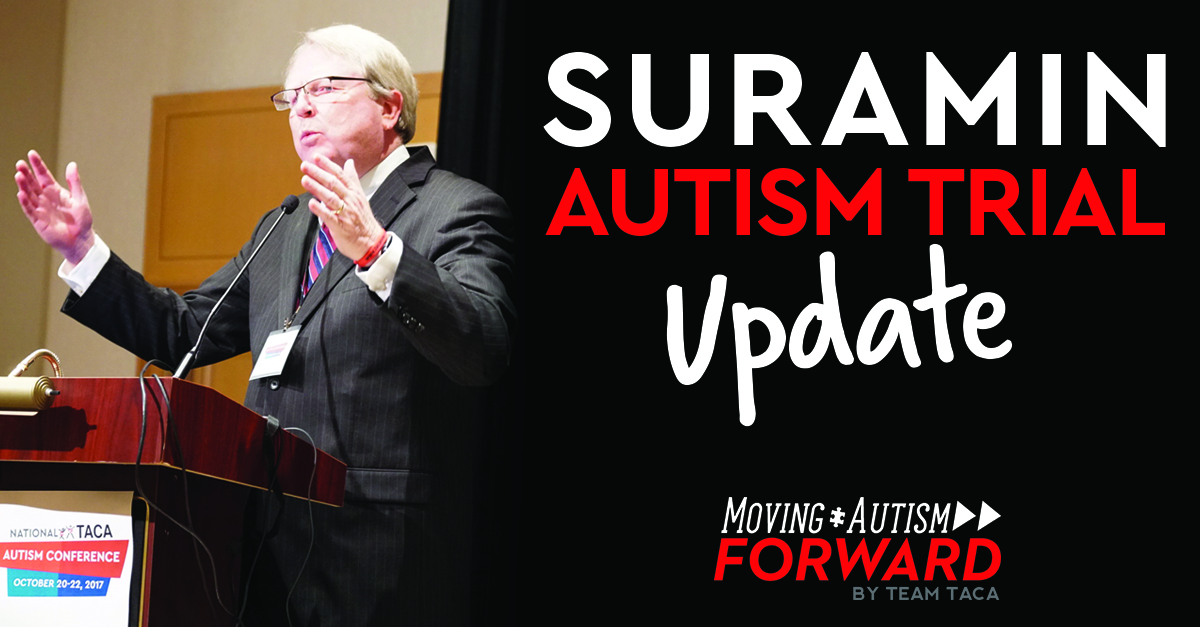 Last year, we posted about Dr.Robert Naviaux’s success with the 100 year old drug suramin in a small double-blind, placebo controlled trial of children with autism. All the children who received a single dose of suramin showed improvements in the core symptoms of autism. You can read the parent stories of improvements in their children here, but these are some of the improvements that were seen –

·         greater resilience to changes in routine

·         increased social interaction with other children including playing games.

This study was small due to a lack of funding. Funding was entirely from private donations.  Larger, carefully designed clinical trials are needed to replicate the results, learn how to use low-dose suramin safely in autism, identify drug interactions as well as detect rare side effects and collect all the data that the FDA requires to approve the use of suramin in autism.

After the success of the initial small trial, we had hoped it would be quick and easy to raise money to fund the path to FDA approval. As some of you know, the road has been much longer and rockier than anyone expected. However, we finally have good news! Read on for an update. 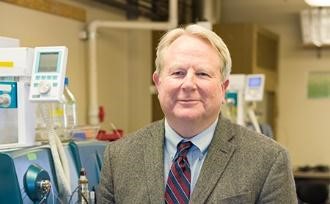 What is the status of the suramin autism trial(s) – has funding been found? If so, when will the trials start?

Dr.Naviaux:  I am very happy to share that a biotech company, backed by very reputable investors with a proven track record, has agreed to make suramin and fund the next autism trials.

Unfortunately, Bayer decided not to provide suramin for the proposed clinical trials in autism. So, the biotech company that will be funding the trials has agreed to manufacture suramin. They will also collect all the data that the FDA needs in order to approve the drug for use in autism.

It will take about a year for suramin to be available from this biotech company. Even factoring in the year that it will take for suramin to be ready, we expect that this will be a much faster and smoother path to FDA approval than attempting to fund each step through charitable donations.

The company will make a public announcement when suramin is available for the next clinical trials. (Per the legal agreement that the Naviaux Lab has with this company, their name cannot be disclosed until then.) The suramin autism treatment 2 (SAT2) trials will start as soon as suramin is available.

We are hopeful that the new supplier of suramin will, in the long run, offer a simpler path forward and fewer potential delays in testing. If future clinical trials show that suramin is safe and effective in treating autism, then the FDA will have all the data they need to make a decision on approval in a shorter period of time than before. Ultimately, this means that the drug can become available for patients with autism or ME/CFS faster than was possible before.

We appreciate your support on the long road we traveled trying to raise funds for this trial. We are very grateful for all your donations, which have helped support the lab while this important agreement was being worked out.

Can you describe the trials that are planned? How many patients, what age, what gender etc.? Will there be a multi-dose trial or just the bigger trial?

Dr.Naviaux: Several clinical trials will be needed.  The first two will test a few doses of suramin given monthly for a few months.  These will be done in about 50 boys, ages 5-17 years old.  The exact ages have not yet been decided. After that, a study will be done that will include girls with ASD.  Other studies will look at drug-drug interactions so we know if suramin interacts with drugs that are commonly used in ASD.  The last clinical trial that the FDA will need will be a Phase III, multicenter trial in 200 or more participants.  The multicenter trial will test the safety and efficacy of several doses of suramin given monthly for several months.

Will suramin be available on a compassionate use basis prior to FDA approval?

Dr.Naviaux:  This is not known yet.  The safety and efficacy of several doses of suramin must be shown first.

How long will it take to get FDA approval?

Dr.Naviaux: This will depend on the results of the next few studies.  In principle, it usually takes about 5 years to complete all the needed studies after the first feasibility study.  This would include the time to conduct and analyze the results of the required multicenter, Phase III study.  If the next studies showed that suramin was exceptionally safe and effective at the doses used, this time might be decreased by a year or two.

Here’s to smooth sailing ahead

After many roadblocks and funding challenges, we are happy that a path has finally emerged for suramin to be extensively tested in autism! Here’s wishing Dr. Naviaux and his biotech partners a smooth and quick path for testing suramin, and if proven safe and effective, winning the FDA approvals needed to make it widely available to children with autism.
Want to learn more about suramin in autism?   Check out the Naviaux Lab page on autism research. http://naviauxlab.ucsd.edu/science-item/autism-research/