Akshay is a fun loving, hard working, 13 year old eating machine. When Akshay was 4 yrs old, he was diagnosed with autism. The odd thing is we were really going to the neurologist’s office to talk about seizures. I guess that’s what happens when you have to wait almost four months for the appointment and the researching takes over. Our life since then has been a balancing act of the two.

A week after Akshay’s 4th birthday he had his first ever seizure. My husband Eddie and I had no idea at this point that Akshay had regressed into autism. We didn’t have a name for the chaos in our lives at the time. Akshay just had these meltdowns, got aggressive and at times he was absolutely inconsolable. On this day in March of 2006 he was having such a moment. His issue was me attempting to put his jacket on and Akshay wanted no part of it. He was jumping up and down on my bed, crying, screaming while I was frantically holding one arm to keep him in place. All of a sudden, he attempted to pull away and boom, he collapsed in a heap. I freaked out!!! I yelled at my husband to call 911, shook Akshay and called his name. Akshay was limp, almost lifeless, his skin color was pale and his lips tinged blue. Finally, after what seems like forever (which was actually probably 15 seconds), he came back and the after effects of what had just happened was very apparent. My very active, very hyper, always moving child was now motionless. He didn’t even want to pick up his head and barely responded to us when talking to him. I called our pediatrician’s office to tell them what had happened. The nurse who answered told me casually,”Oh it sounds like he had a seizure, you should probably come in.” Yeah, you think?!!! He wasn’t capable of moving, so Eddie carried him downstairs to the car while I maneuvered his younger sister as we rushed off to the doctor’s. Our doctor was pretty surprised how quiet Akshay was. After 45 minutes, he finally returned to the Akshay we knew. An EEG was ordered and a referral to the local Children’s Hospital was made.

When our approval to see the neurologist came in, I rushed to call and was thinking they would see us ASAP. ‘Cause really, a four year old collapsing was serious, right? Apparently, at the neurologist’s office it was clearly not serious. It was now April 1st, and I was told we would not be seeing the doctor until early July, which is why I thought he must have been fooling me. Sadly, it was not an April Fool’s joke and Akshay really did not have an appointment until July 2. So we were told to sit tight, go do our 20 minute EEG and wait to see the neurologist in July.

When you have almost four months to sit, worry, and wonder what is going on with your child, you find yourself spending a lot of time on the computer. Every time I would put in research for seizures, autism kept popping up in all the results. Hmmmm. The more I read about autism the more I was starting to consider that all this chaos in my home with Akshay had a root cause, autism. So finally on July 2, 2006 when we walked into the neurologist’s office, the doctor said to me,” So I see we are here to talk about seizures.” I promptly answered, “No, I think we need to talk about autism, because I think my son has autism.” I’ll never forget the confused look on the doctor’s face as she asked why. I proceeded to list off all the signs of autism and the issues that we were experiencing at home with our son. From him only having 5 words, to the bouts of severe aggression, tantrums, lining up of toys, not looking at us and the list went on and on. I told her I’d be happy to talk about seizures after, but we had to talk about the possibility of autism first. After ninety minutes in the appointment, we walked out with a dual diagnosis of seizure disorder and autism.

Akshay’s life has been a delicate balancing act of treating his autism and epilepsy. When I try to explain his seizures, most people picture what they see on TV. The falling down, body flailing, foaming at the mouth, Hollywood stuff; it’s not what happens. It’s as simple as him blinking rapidly or just staring off, as if somebody hit the pause button on him for a few seconds. On the rare occasion Akshay has fallen down, he has become disoriented and wanted to fall asleep because those few seconds knocked every cell of energy he had in him.   On the very rare occasion, it’s warranted a trip to the ER.

The main frustration of my son’s seizures are the countless medical professionals who discounted his seizing “autistic like” behavior. With Akshay’s limited verbal skills, he cannot tell people when he is not feeling well pre or post seizure. So his behavior afterwards of being agitated or angry is shrugged off as a typical autism symptom. In his nine years of Epilepsy and Autism, he has come to me exactly three times to say,” I feel funny”. Thankfully nearly three years ago, we found a neurology team who took my concerns seriously and his seizures have decreased greatly.

My worst mom moments are when I see the school name on my cell phone’s caller ID during the school day. My heart always sinks and I hold my breath as I answer the call. The calls are usually like this: ” Hi Mrs. Garcia? Akshay is okay but….” and the rest is filled in with the incident of a minor episode, he’s now resting at the nurse’s office and he’s recovering well. Sometimes the call is hurried with,” Mrs. Garcia you need to come over right away”, which means he’s had a major episode.

We have seen the most progress with Akshay in the last four years. We are extremely lucky that our neurologist and MAPS physician work closely together to keep him at his maximum health. It’s been a balance of treating his mitochondrial disorder and epilepsy as his brain and energy systems are fighting for dominance instead of working together. Akshay is in a fully mainstreamed general education classroom setting with an aide. The aide, in the last few years, has been more necessary for health reasons rather than his autism.

Never let a professional tell you it’s just “autistic” behavior in your child. Behavior is our children’s way to communicate to us. It’s not just because they have autism that they have behaviors, they just don’t feel well and are telling us so. This is exactly how Akshay can tell me he’s not okay. Get a 24hour EEG and find a neurologist that will listen to you. Also, a MAPS physician is crucial!

Are our lives perfect? No, but it’s much better now. When the school calls, I am a little bit more relaxed than I have ever been. 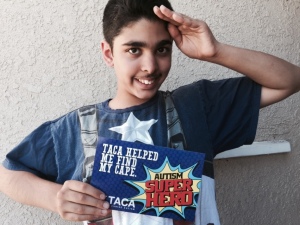 One thought on “It’s not an #autism behavior, it is a seizure”