“Dad, I miss hockey.” That’s what my 6 year-old son, who has autism, said to me a couple of weeks ago as we were getting ready for dinner. I can honestly say that I never expected to hear those words from him.

I’m a sports guy. I grew up in a neighborhood where the kids would meet at someone’s house after school and we’d play sports. From football to soccer to street hockey to the classic “kill the guy with the ball”, that’s what we did. We established our allegiances to our favorite teams and still root for them to this day. Growing up, I spent most of my weekends travelling around to hockey rinks in the Mid-Atlantic, many of those trips with my father. I didn’t appreciate those road trips with dad back then, but I see how valuable they are now. To this day, my dad and I talk about sports more than anything else.

In the winter of 2006 when I found out that we were having a boy, I immediately started thinking about those typical father/son experiences – having a catch in the back yard, teaching him how to ice skate, playing one-on-one in the driveway and letting him win, etc. Obviously there’s more to fatherhood than this, but it’s what I would think about waiting for my son to arrive.

Calvin (I’m an Orioles fan) was born in July of 2006. At 20 months old, he was diagnosed with autism. Before we brought him to the doctors, we knew that something wasn’t right, something was missing. He was disconnected. He didn’t have any speech. In fact, he had no way to communicate at all. If he wanted something, he would fuss or scream or cry until we guessed what it was, and we were ok until he changed his mind and wanted something else. After the diagnosis, we began a journey to get our son back by any means necessary.

My wife, Melody, started furiously researching to find anything that might help. We were engaged in traditional therapies and started incorporating other non-traditional approaches. Once we changed Calvin’s diet and started seeing a DAN practitioner, we saw positive results almost immediately. He was responding; there was life in his eyes! Melody also found TACA, which provided invaluable moral support and guidance, a much-needed life preserver in an ocean of fear.

While I was always an active participant in Calvin’s various treatments and therapies, there is a moment I will never forget that changed my role in his recovery. At the appointment discussing starting Methyl B-12 shots, Dr. Dornfeld looked at me and said “It’s Dad’s job to do the shots. Mom’s got enough; this one is your responsibility.” Not going to argue with that logic, I embraced the role and became the shot guy. I tried to share in as much of the responsibility as I could. When we did a round of HBOT, I was the guy. I would wake up early and do a session in the ‘spaceship’ before I left for work and then would do another session before Calvin went to bed. I needed to have that role with his treatment and recovery. Lying in a hyperbaric chamber for an hour might not be having a catch in the backyard, but I was able to connect and spend time with my son.

Calvin will probably never be a sports guy. I don’t foresee him wanting to go to or doing well at a Rutgers football game – way too loud and over stimulating for him. I took him to a hockey game and he got very excited when the players left the ice after warm-ups because he thought the game was over and it was time to go home. He wasn’t happy to find out that it hadn’t even started yet. But he knows what teams we root for. He will properly celebrate a Tottenham goal (jumping fist pump) and he might just interrupt his own activity to high five after a Cowboys touchdown.

However, here we are 5 years after his initial diagnosis, and Calvin is telling me that he misses hockey. The sentence came out of nowhere but is still quite significant. First and most importantly, my son is talking to me. There was a time I was afraid I would never hear his voice. Too often I forget this and take for granted where we are now versus where we started. Secondly, Calvin misses hockey. Getting up early and getting to the rink isn’t much of a chore, but keeping him on the ice for any period of time usually requires some negotiation. But it was the first year he was even willing to get on the ice so we’ll take what we can get. 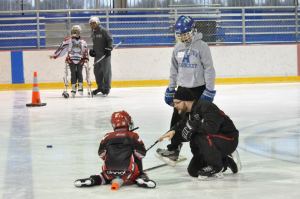 The Bulldogs are an organization made for kids like Calvin. We accept all players, regardless of skill level or prior experience. We celebrate each and every accomplishment, despite how common it may appear to an outsider. We are a special hockey program designed to introduce and teach the game of hockey to children with special needs. We want to provide an opportunity to experience the game we love to individuals who would otherwise not have the chance.

With the help of the American Special Hockey Association, I got together with a couple of parents with special needs children and some dedicated volunteers and we founded this team. Every Sunday morning from November to March, we meet at a freezing cold rink that is only partially enclosed and have practice. What was an average of 17 players in our first year has grown to more than 30 in our third year, and I expect to have more in the upcoming season. It’s an indescribable experience to be on the ice with these players, seeing the smiles and the excitement. We celebrate all of the milestones, from standing on their own to putting a puck in the net to playing in an actual game. Parents see their children achieve goals they once thought unimaginable. 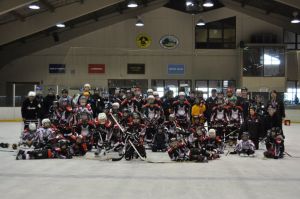 And I am now one of those parents. Last year, at the last practice, Calvin skated on his own for the first time without the help of a coach. Sunday mornings are about quality time spent together at a hockey rink, like I had with my father. My response when he told me he missed hockey? “Dude, I really miss hockey with you too.” I’m already looking forward to next season. 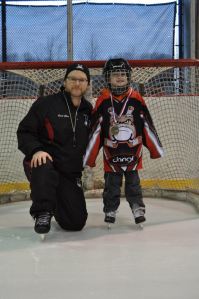 Editors note:  Did I mention HOW MUCH we love TACA dads?! Well, I do. We do! The world would be much harder without them. Thanks Chris for your story. You have scored big time in our books!