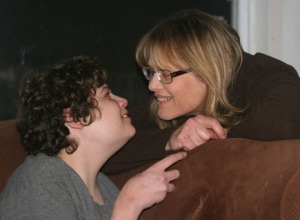 While I write this story, I am looking at my son, Beau. He is happily sitting on the couch wearing shorts and a t-shirt, munching on pistachios, and grinning while watching Ghostbusters, a movie he specifically requested to watch. To most people, this would be a very ordinary scene. There is nothing remarkable about a teenage kid lounging on a couch in grubby clothes, eating and watching a funny movie. However, truly it is nothing short of a miracle to me. Beau is nonverbal; he cannot speak, and for more than three years, he was unable to eat table food. He also has not been able to tolerate wearing a waistband for several years. I am so grateful to be living this ordinary, yet extraordinary, moment in my house and sharing it with you.

To understand completely, I have to take you back in time a bit. Beau is 17 years old and was diagnosed with autism in 1998. He is nonverbal, spends most of his time engaging in self-stimulatory behaviors, and has many troubling behaviors. We have lived through many periods of his life that included a great deal of self-injurious behavior and aggression. We always found that pain was the cause of these dark and desperate times. Gut pain, reflux and migraines were the three usual culprits, and sleepless nights always accompanied his pain.

He was featured on this blog earlier this past year (1.) The title is so important “Holding onto Hope. This past year still shows hope is definitely alive and well in my house.

The years from age 16 months to 4 years brought loss of language, loss of eye contact, repetitive behaviors, tantrums, sleepless nights, eczema, fungal rashes, and rivers of diarrhea. By the age of 5, diarrhea had turned to constipation, and his constipation was epic. He needed enemas and/or suppositories daily. In 2007, reflux emerged and brought with it broken windows, broken drywall and his refusal to wear clothes, especially anything with a waistband. The year 2009 ushered in migraine headaches, which brought with it more self-injury and something new, aggression towards others. In 2011 and 2012, Beau was in the hospital or in the emergency every three to four months with an ileus, his bowel just totally shutting down. An entire book could be written about all the pain and struggle in 2011 and 2012. Two grand mal seizures over the years can be added to the list of ER visits as well. These times are by far the darkest of my life. I don’t know that there are many things worse than watching your child in so much pain that he gives himself black eyes, or bites, pinches and hits his body to the point of bleeding, bruising and swelling. My heart goes out to every mother enduring this godforsaken situation. I would wish it on no one.

In 1998, biomedical treatment consisted of the GFCF diet and magnesium and B6 supplementation, which I learned about from a speech therapist. Also in 1998, I saw a story on the news about a nonverbal boy with autism who began to speak after a secretin infusion during endoscopic procedures. At that time, we were living with a 3-year-old boy who would only eat two foods and had diarrhea twelve times a day. I was consumed with the “autism” and thinking I’ll fix that “other stuff” later. What I’d heard about diet and then secretin made me wonder if the “autism” and the diet and diarrhea issues were linked. I began to hope we could turn things around. So we embarked on the biomed journey and never looked back.

Between 1998 and 2011, our list of treatments and evaluations include: multiple endoscopic procedures and pill cam studies, multiple 24-hour EEGs, two MRIs, two lumbar punctures, muscle biopsy, GFCF diet, SCD, rotation diet, elemental formula, almost every vitamin and mineral known to man, herbs, probiotics, fermented foods, enzymes, biofilm protocol, many anti-inflammatory medications, some immune suppressing medications, antiviral medications, antibiotics, IVIG, HBOT, and chelation. Some of it helped a lot. Some of it helped a little. Some of it helped not at all. Some of it made things worse. I don’t regret any of it though. No matter how Beau responded to a treatment, we always learned something about his medical condition that helped us determine the next step. If there is a next step, then there is hope.

Over the years, we began to focus on only two goals — get Beau out of pain and get him communicating more effectively. We worked diligently to evaluate and treat medical issues while the private and school district therapists tried to teach Beau to talk, use sign language, picture exchange and a number of augmentative communication devices that came and left our house. Hours and hours of DIR/Floortime and Son-Rise playroom time took place at my house. I spent a few hours a day with Beau employing these methods to engage and teach him, and other volunteers and a paid aide paraded in and out to help Beau as well. For many years it seemed like we weren’t making much progress with either goal. It was all so disappointing and disheartening, but we soldiered on, hoping for better days ahead, holding onto the thought that this is our son, and he deserves a better life. Within the last year and a half, two important things happened, at last bringing some light into our dark tunnel.

First important thing. In the midst of the ileus episodes and hospital visits, I started seriously wondering why my 15-year-old son was not showing any signs of puberty. Beau has really struggled with growth and weight gain over the years, and we always attributed that problem to the condition of his gut. Now with no puberty in sight, I wondered about hormones, including growth hormone. We saw a mainstream endocrinologist near our home. He was stunned by Beau’s medical history; he’d never seen anything like it. He ordered a complete growth hormone study, including four different tests/procedures. We learned that Beau was severely growth hormone deficient. So we began daily growth hormone injections. Beau slowly began growing and gaining weight. It also really gave him an appetite for the first time since he was three years old. He had been on elemental formula for three years prior and was refusing to try table food again. The growth hormone gave him an appetite, and he began wanting food again. I have since learned that human growth hormone is anti-inflammatory, and since Beau began these injections, he has had no more ileus episodes. And puberty kicked in, not that it’s so much fun, but it’s part of normal development, so it is welcome at my house.

Second important thing. After years of searching for someone who could teach Beau the Rapid Prompt Method of communication (RPM), I found someone who was less than two hours away by car. Just as Beau started to feel better with the growth hormone on board, we started seeing this amazing speech therapist who taught Beau to use RPM. Beau had made little to no progress with sign language, PECS and a number of communication devices over the years. Many “experts” had told me that he was mentally retarded. At the age of 17, his IEP goals were still on the level of a preschooler. I knew other nonverbal kids had responded very well to RPM, and at that first RPM session, I held my breath and hoped. At that first session, we learned that Beau could read, spell, count and do some math. RPM involves pointing at letters to spell things out. It is a beautiful, simple, low-tech avenue of communication, teaching and learning for these nonverbal kids. Since then, Beau has been able to start doing academic work. His vocabulary is around the 7th grade range. He can add, subtract, and knows some of his multiplication tables. He has been taking everything in all these years, but had no way to show us what he knew. His mind and emotions are intact, but his motor function and control are very poor. He has told us he struggles to move and respond the way he wants to, as if his body won’t listen to his brain. Through RPM, he expresses emotion and concern for others. He is finally able to communicate about his physical pain, more able now to guide me and his doctors regarding treatment. He is funny and has an opinion on everything. Twice now he has told me I drive too fast. As he gets older, RPM will allow him to advocate for himself as an adult.

The last year of my son’s life has been his best ever. He is in much less pain, and he is communicating very effectively. His life is so much better. Our family’s life is so much better. It was a long road. Without each step on that 16-year journey, he would not be where he is now. Our story is a “never give up” story. You never know how close you are to that light at the end of the tunnel. One more shovel of dirt, and you might see daylight. So don’t stop. We’re not done either. Call me crazy, but I still want my son to talk. He told me he wants to be able to talk. So we will keep digging, working, trying. I have hope to uncover more for Beau.

Well, Ghostbusters is almost over. I’m going to sit with my son on the couch, eat some pistachios, and watch the end of the movie. I love a happy ending.

Editors Note: This family is the poster family of HOPE. Not only do they continue to look for answers, have a positive outlook, they are bonded as a family to drive positive change for a loved one. I appreciate Linda and her family so much. They have also found the time to continue to give to TACA Illinois and outreach to help families living with autism in their community. “Give up” is a term you will NOT find in their vocabulary. I appreciate their efforts so much!  ~ Lisa

13 thoughts on “An Extraordinary Moment”