May 19, 2013 was a day that really put Talk About Curing Autism on the map in Wisconsin. It was the day of our first big event – the Madison Mud Run. But, it wasn’t actually our event at all. We essentially hijacked an independent event with a sea of red Team TACA T-shirts, raising awareness and funds and having a great time in the process.

TACA Wisconsin held our first meeting in November of 2008. Since then, we’ve provided support to families on a monthly basis with regular speakers and parent support. Often, parents feel bewildered when their children are first diagnosed with autism. It helps to have experienced, knowledgeable parents available to provide assistance and support. For parents of children at any stage in the autism journey, TACA continues to provide a positive, non-judgmental environment of support.

The Wisconsin Chapter has been slowly growing since that first meeting in 2008. We even held the very first TACA Real Help Now conference outside of California back in 2010, but we had not put on a big event up until this point. Last year, we were offered a fundraising opportunity to collect shoes for recycling at a mud run in Milwaukee. We enjoyed it so much; we wanted to find another opportunity closer to home in Dane County. So, We signed up to do the shoe collection at the Madison Mud Run this year, and in doing so, we also decided to put a team together to run participate in the event.

Our goals for creating a team were threefold:

1) Create autism awareness – yes, as parents we are certainly aware of autism, but you’d be surprised how little the general community knows.
2) Create TACA awareness – get our organization’s name out into the local community.
3) Raise funds for Team TACA Wisconsin.

Prior to the event, we began a social media campaign aimed at creating a “buzz” to build our team of runners, and to hopefully bring in some donations. Initially, we thought a team of about 30-50 runners would be great. We were encouraged by friends to dream big, so we set our sights on 100 runners for autism. Did everyone from our chapter sign up? No, in fact, some were reluctant to be involved at all. The words “mud run” were invoking a lot of fear from many parents. We focused on getting my bootcamp friends — many whom had no connection with autism — to sign up for our team. As each person signed up, they posted a picture of themselves with a sign on Facebook, saying why they were running for TACA. Our TACA Wisconsin Facebook page started receiving a lot of traffic, as people learned what we were doing and our team began to grow. As our team grew, more parents of children with autism gained the courage to sign up too. Once we had enough pictures, we put together a fundraising video for our runners to share with family and friends to ask for donations for TACA Wisconsin.

I am going to side-track a moment here with another story that came about due to the mud run. Five years ago, when my son was first diagnosed, I spent hours every day researching about autism. I was particularly interested in gluten and dairy free dietary interventions that could help and spent some time in a Facebook group regarding diet for autism. Through this group, I connected with another Mom, Tresa, in Canada, with whom I would communicate on and off for the next few years. Tresa has a son who had autism and Lennox-Gastaut Syndrome – a particularly aggressive form of epilepsy. Her son did not respond to medication for his epilepsy, leading her to implement a ketogenic diet. What’s unusual about her situation is that he also went gluten and casein free – no food coloring, MSG, etc, which is not typical for the ketogenic diet. Her son is now considered neurotypical and has recovered from LGS.

Last year, another friend of mine, Lisa, told me her 8-year old niece, Autumn, had suddenly begun having uncontrollable seizures — often hundreds a day. She was being treated at the Cleveland Clinic and was not responding to medication. The neurologists treating her were concerned that her condition might be potentially fatal. I suggested she have her sister Ann (Autumn’s Mom) get in touch with Tresa in Canada, due to the similarities in their situation. Tresa and Ann spoke on the phone late one night and in Ann’s words “so our recovery began.” Autumn went on the ketogenic diet, and with Tresa’s help and support, and the support of the professionals she was working with in Canada, Autumn has been seizure free for over a year now. That in itself is an amazing story and I am grateful I was able to be part of it. More about this story later.

In the weeks prior to the mud run, I asked virtually everyone I knew, including complete strangers, to join our team. We ended up with a great mix of people, numbering about 95. Many of them had no connection with autism except for knowing me or other TACA members. Some of them were fitness professionals; some fellow bootcampers; medical providers, including loads of therapists who work with children with autism; we also had lots of TACA Moms and Dads, siblings and grandparents too. Ten year old Ryan Van Dyke, who has autism, completed all 5 miles with a team of therapists and his mother, Annette (my trusty TACA Co-Coordinator). His 11-year old sister Kylie also completed the run.

There were a total of about 1,000 runners. We were the 10 percent, wearing bright red shirts and we were everywhere. Many people thought the mud run was for TACA! It was so much fun to line up with everyone in our wave, which started with a sack race. Some Team TACA members raced off, some of us kept a medium pace, and some walked. But, all of us had fun! We were surrounded by friends and family, volunteers collecting shoes, and random people who had heard we were running and turned up to support us.

Several unknown females made hilarious comments to one of our TACA volunteers: “What’s up with all these hot guys in Team TACA T-shirts?” Some of our team members won prizes for being in the top three in their divisions. We also won the fastest team award – still not sure how that happened! All in all, it was so much fun to run and get dirty for TACA. Some other comments from Team TACA members: “It was my first race! Thanks TACA what a great time, I’m grateful that I’m able to run with such beautiful peeps!” And another: “Thank you so much for letting me run with Team TACA. At the finish line a parent with a child that has autism thanked me for running for her and introduced me to her child. It was an honor, thank you so much!”
Our team members also came from near and far. Many were from the Madison area, but we also had runners from Milwaukee, Illinois (including TACA Naperville Coordinator Jacey Smith), and yes, Canada. Tresa had been so inspired by our online campaign; she decided to fly in from Calgary to run with us. She also auctioned off some paintings online to help raise money for TACA. We had never met in person and it was so awesome to have her there.

Since she was going to be in the area, Lisa’s sister Ann, drove from Indiana to meet her. So, after running and crawling in the mud during the day, Tresa and I got cleaned up and all four Moms (Tresa, Lisa, Ann and I) got together after the race for dinner. After communicating for a year online and via phone to save a little girl’s life, we finally met in person. It was a really emotional experience. It took a mud run to bring us together in person, although all this time we’d been helping each other help our kids. That’s primarily what TACA is about – families helping families.

All in all, it was a successful day. We raised awareness, had loads of fun, and we managed to get coverage on two TV stations. After the race was done, we’d raised over $12,000! For many people on our team, it was their first run. Many of them are talking about doing it again next year, so I guess it’s going to become part of our regular schedule. Now, I’m thinking – 200 runners for autism next time? 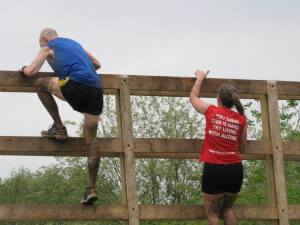 Editors note: TACA can help you race for TACA at any existing race. Please see this link for details and how to’s: https://www.tacanow.org/ways-to-help/team-taca/ . Special thanks to Kate and her group of mud warriors for all their support!