Small town USA is a buzz in Spring with sports teams making it past district competitions, sectionals or regionals in order to make it to ‘The Big Time’ — the State Tournament.  Where we live, believe it or not, we are now sending a third team to a state tournament in one school year.  This is a time of tremendous excitement in small towns.

Businesses stop everything to be ready out on Main Street to cheer as the team bus drives by before they head out of town for the state tournament.  School children make posters and line up on sidewalks to cheer and wave at the bus.  For opening round action, the game will be shown in the school auditorium.  This ‘Big Time’ is a very big deal. And I love almost everything about it – almost.

What I don’t love is that all this excitement brings about tremendous anxiety for my son who has autism.  While his class is heading out to the sidewalk to cheer for the team, Charlie will be frantically concerned about somebody remembering to give him his noise-canceling headphones because he has severe sound sensitivity.  Sadly, he won’t be able to explain this issue to people.  And of all days, today is the day he has a substitute teacher and I wonder if she knows about the headphones.  Comfort for Charlie is found in routine and consistency. When I hear that a “Parade” is planned with the championship teams walking through the school hallways so students can cheer, I cringe. 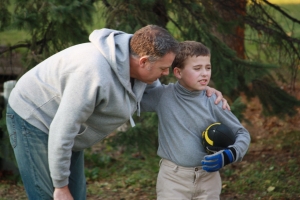 After experiences with past teams making it to state tournaments, I learned to gear Charlie up for the parades and cheering.  I made sure he had his headphones in his backpack, and if it seemed like the day might be a disaster, I made sure to show up in case an early dismissal was necessary.

I know that these state tournament bound teams have had months and even years of practice to get to where they are today.  Practice makes perfect, right?  Thanks to the continued success of several teams in our school, Charlie has had many opportunities to practice cheering them on next to his classmates.  This week, while the entire community is cheering on the girls’ basketball team headed to the state capital for the state tournament, I am cheering too.  Charlie was able to have his school day disrupted, be on the sidewalk and cheer on the team as they left town on the bus.  Included with the bus was a parade of vehicles which included a fire truck complete with a siren.  It has taken years of therapy, treatment, and education in order for him to have stood on that sidewalk.  In a family with autism, we consider this ‘The Big Time’.

My hope is that more kids can make it to the Big Time.  Charlie is not recovered from autism and has many symptoms of the disorder.  But he is making it.  And we’re cheering.  And for a little while, the whole town is cheering at the same time.  Besides cheering for that team and their amazing victory, I always look at Charlie seeing him cheer and my heart starts to sing.  This is ‘The Big Time’ for us in so many ways. 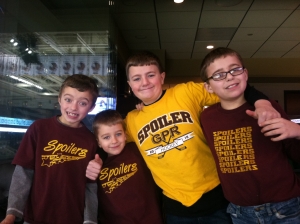 2 thoughts on “The Big Time”